Log in Register
Menu
Install the app
You are using an out of date browser. It may not display this or other websites correctly.
You should upgrade or use an alternative browser.

Steam ID:STEAM_0:0:179373502
Discord name: Kurger Bing#0046
For how long have you played on CG SCP: I'd say about a month and a half, since the beginning of December roughly
Age: 19
In what country are you located?:USA
Time zone: EST
Character name(s): Chaos Insurgency: Nishiki
Foundation: Kiryu
Civilian name: Goro Majima
What server are you applying for? (SCP-RP UK or SCP-RP USA): USA

What is your SCP level and total level? (Provide a screenshot of the level menu):
- 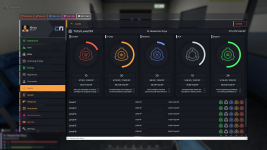 List all whitelisted, MTF, or CI roles that you hold or have held:
-Nothing yet.

Have you received any kicks/bans/warning? and why?:
-Nothing

What makes you suitable for SCP-096?:
-I think I would bring a fun and interesting spin to SCP-096. It would be fun for everyone on the server and I think everyone would have a good time dealing with the goofiness I could bring to the table. When I say goofiness I of course mean within my boundaries, I obviously wouldn't break any rules or anything. Also, SCP-096 is one of my favorite SCP's. So I know a lot about him and what he does, and would love to play as him on the server.

What is the usual behaviour of SCP-096 when pacified?:
-SCP-096 will cry and sit when calm, and if he is alone while doing this he can wonder for 1 minute. If someone sees his face he gets mad can attack until he gets them. Then he repeats.

When breached, where is SCP-096 allowed to go? Can SCP-096 beeline straight to D-Block?:
-SCP-096 can only go where the target who saw his face can go. No where else, if his target is in D-Block, he could certainly go there, otherwise no, he can't.

How is SCP-096 re-contained? Please describe all steps of the process:
When SCP-096 breaches, two things spawn on the map, a bucket, and his picture showing his face. The picture needs to be destroyed, and the bucket needs to be put over his face. SCP-096 then will finish attacking his targets until he has no more and be pacified and calm down. He is then to be restrained and brought back to containment.

APPLICATION ACCEPTED​
Hello @Kurger Bing
Thank you for taking the time to make an application!
Congratulations on your new Whitelist!
Contact an Admin+ In-Game to receive it!