Log in Register
Menu
Install the app
You are using an out of date browser. It may not display this or other websites correctly.
You should upgrade or use an alternative browser.

steamcommunity.com
Date of blacklist: 22/01/23
To the best of your knowledge, why were you blacklisted?: I was playing on an alt account since i was permabanned on my original due to MRDM and Sever toxicity (Wasnt racism or any kind or phobic)
Please list any times you have used methods to change or hide your IP (incl. game streaming, e.g. GeForce Now): I have never used any of these but i did follow a tutorial on how to get any TS bans lifted

how to be unbanned from teamspeak - Search Videos

www.bing.com
this was the video i followed to do this
Please list any alt accounts: zyon977 was the only alt i ever used
Who blacklisted you? (if known): Marco and Luft
Link a copy of the in-game rules here (the url):

Civil Networks SCP RP Rules Discord Link: https://discord.gg/5M3ZwhQkev Teamspeak Address: ts3.civilgamers.com All decisions made in game by staff are to be respected. If you feel that your punishment was unjust then speak to an Admin+ in game or make a forum complaint or a ban appeal. Arguing...

www.civilgamers.com
What will you do to stop this from happening again:
I was acting like a child from cheddar getting banned and then proceeded to spam ping many people specifically marco who i had thought banned cheddar at the time as i was told this by someone else. I was then banned off all the discords for doing this and then decided to message (at the time) admin Foxatron to ask him the easiest way to be permabanned, to which he responded

I lied about the reason to hope he would tell me but he said nothing instead. I went on the server and hopped onto my gensec captain whitelist to then use nitro-glycerine to bomb A-1 whilst they were in D-block. I was pulled to a sit with foxatron where i was banned permanently for MRDM and severe toxicity. This was followed by a teamspeak ban. I went onto the forums to make a fairly toxic post which i now apologise for. I believe this post was removed overwise i would have included it. After a forums ban soon followed and i messaged Marco to ask him to remove it so i can appeal. 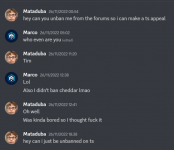 I understand why he said lol since I was just banned and asking for it to be lifted. After a month or so i decided to make an alt account to play the server again to play with friends. I played for a couple days then was blacklisted.

I will simply not be an idiot again like i was when i got banned, i am sorry for calling you fat as well vents.
Prior to this, have you ever been warned/kicked/banned/blacklisted? Yes i had been warned but majority of them was when i had first joined the server and i was banned only once, and that was a complete misunderstanding.
Why should you be unblacklisted:
I really enjoy playing this server since i have made a lot of friends here and i don't wanna leave a sour taste whenever people think of me. When i used to play the server before the ban, i would like to think i was pretty well known and not for being bad. i had talked to a huge amount of people and always tried my best to be as friendly as i could to them. I was once a moderator and a trial gm so I have experienced nearly all sides of the server. I tried to make the server a happier experience for every one i came across. If i was to be unblacklisted i won't make the same mistakes as i did last time. I doubt people will trust me again especially A-1 but i just hope they can forgive me. I honestly do enjoy playing the server and had good friendships with a lot of people even admins and above. All i ask is to have that enjoyment again.
How can you ensure that you won't break any other rule?:
I will always think about what i do not just for the consequences of myself but for the effects my decisions will have on others. I will be a much better person than i was before and will always have the server in mind when i make decisions on it. I will read over the rules and make sure that i remember them to stop myself from ever breaking a rule no matter how much of an advantage they give me.
Why do you want to rejoin this server?:
As i said i truly have a lot of fun here and wish to remain a part of the community that i like so much and i love the people in it much more. I have seen people at there best and at there worst and just wanna talk and play with them again.

I truly regret my decisions to make alt accounts and i do truly hope they will be forgiven. I understand what i did was wrong and i admit it was stupid and childish. It wont ever happen again. I had so much fun whenever i played and wanna have that fun again.

Edit:
This is the only time I Have ever deliberately tried to negatively impact the server and to be fair what i did was stupid but not deserving of a permaban. I have never done anything else to slander the community. I do hope you can respond to this as soon as you can.
Last edited: Jan 22, 2023

Just to clarify you was not black-listed at all . I permanently banned you because you made it very clear that you were just trying to sabotage the server and the game for other people ; So i see not reason for you to be unbanned whatsoever .

Just to clarify you was not black-listed at all . I permanently banned you because you made it very clear that you were just trying to sabotage the server and the game for other people ; So i see not reason for you to be unbanned whatsoever .

You misunderstood what I meant when I asked that message. I never wanted to be permabanned. I was trying to avoid stuff that would get me permanently banned. I could have done worser stuff but didn’t out of fear of getting a perma ban. Instead of getting what should have been a 2 week ban I was given a permaban. And I have been blacklisted due to an alt account I have used to play the server because I was banned by Marco for making a childish post.
I’ve been playing for a long while so why would I all of a sudden just decide to get perma banned. Regardless of why I did what I did it never should have resulted in such a long ban. People have done much worse things that affect the server in more ways than I have. This is the first instance where I’ve tried to deliberately do anything to the server so I believe I should have been given the same ban as any other person.

I admit I did make a mistake all I ask is to be forgiven and given a second chance.
Last edited: Tuesday at 11:04 PM

Thanks for taking the time to make a ban appeal.

After speaking with Foxatron and reading into the appeal, we have decided to reduce your ban from permanent to 6 months (26 weeks)